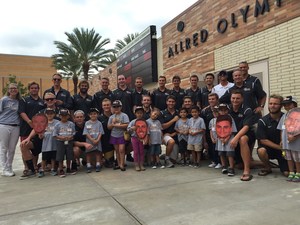 Catherine Loomis, a teacher at Whittier Ceres Elementary School and mother of California Lutheran University water polo player Nick Loomis, wanted to encourage her students, many of whom come from low-income families with parents who didn’t attend college, to go to college. She wrote to Cal Lutheran’s water polo coach last school year and asked if any of his players could serve as mentors to her students. The Kingsmen water polo players quickly became role models for the kindergartners.

The effort has also gone beyond the water polo players here. CLU’s office for University Relations has also gotten into the act, exchanging care packages with the students at holidays. Nick said the effort is a part of a bigger movement called No Excuses.